WerkNet
Your Family
Your Career
Your Health
Your Money
You and the Law
Occupational Guilds
Solidarity Youth
S-Leer
Home › Articles › Finance: Beware of Black Friday 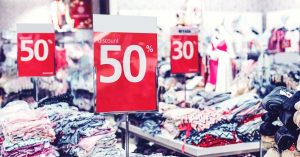 For the past few years, Black Friday has been marked by consumers rushing, without thinking, to the nearest wholesaler to make purchases during Black Friday, where, among other things luxuries and various other items are offered at better prices or so-called bargains. In previous years, consumers stood in long lines, sometimes even to the back of stores, to ensure that they do not miss out on a bargain. That was the good old days when social distancing didn’t force you to stand further apart and when you were able to do your shopping without having to wear a mask to protect you from a pandemic.

This year, however, is different and like most things, there are new trends and ways of doing things. As we have learned to adapt, retail groups have also changed their marketing and sales methods to adapt to the pandemic. Examples of this are retail groups not only no longer only offer special offers on Black Friday, but numerous retail groups have extended Black Friday to Black November. According to Matthew Leighton, spokesperson for the local online shop, OneDayOnly, online sales in particular are expected to increase this year as the pandemic continues to play a role in the daily lives of consumers.

Research conducted by TransUnion claims that consumers are more likely to take out loans and that they also increase their spending limits during Black Friday. Research also shows that new accounts opened during the week of Black Friday, compared to the same week a month before, indicated an increase of 37% in new accounts and a rise of 21% in the total credit limits for new credit cards, clothes and retail accounts.

According to Lee Naik, CEO of TransUnion Afrika, the biggest growth in the amount of money spent by consumers on Black Friday can be attributed to high-risk loans.

In 2020, thing look much worse because the economic consequences of the pandemic already left 2,2 million South Africans without a job. 42% of the country was left unemployed in the second quarter compared to the 39,7% of the first quarter.

To supplement their declining income, South Africans are also increasingly incurring more debt and those in a tight financial position spend on average R6 out of every R10 they earn to repay their debt.

In a population of almost 60 million people, there are only 14,1 million people who had a job during the second quarter that could generate an income to put food on the table.

According to Benay Sager, COO of DebtBusters, a company specialising in debt management the average uninsured debt for consumers are 41% higher than in 2016. He also mentioned that those who earn more than R20 000 per month, has 58% more uninsured debt than four years ago.

Economists warn that the worst job losses are still underway and that despite the economic consequences of the Covid-19 pandemic and the impact it has on the South African economy, the country has not passed the worst part.

Therefore, it would be wise to avoid shopping on this year’s Black Friday and will be better for every consumer to keep their wallets in their pockets and to plan for the future where the money you spend today on unnecessary luxuries can rather be saved for 2021.

The pandemic’s effect on retirement savings

In a tight spot with debt?

How to make sure your claim is paid

Do you receive a travel allowance? You may owe SARS money next year

Tips for the insurance of your second-hand motor vehicle